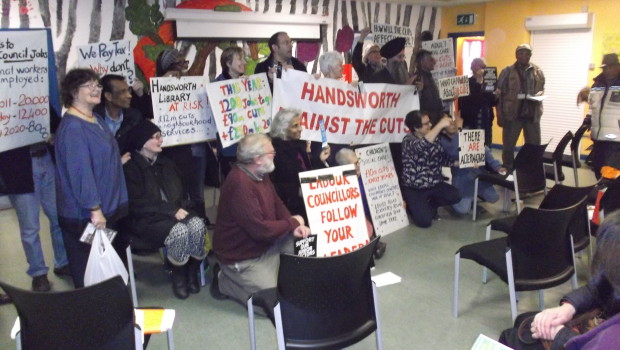 Letters from Handsworth Against the Cuts and Unison about impending cuts which will have big impacts locally.

Happy New year – but I am afraid we are facing yet another round of cutbacks, so this letter is to update you on a number of campaigns.

Nurseries
All the city’s day nurseries are under threat; several are in our area. These nurseries provide vital support to the children and parents who most need them. There is a city-wide campaign to defend them. If you would like to help out with the campaign, for instance with leafleting, please contact Richard.Hatcher@bcu.ac.uk
You can find out more at the “Save Birmingham Nurseries” facebook page or by clicking on NurseryClosures.

Home Care workers
In the context of Tory cuts, with no ring-fencing of the adult social care budget and with the home care service already cut back – now 40% of the enablement staff face redundancy. On top of this the council plans to introduce an unacceptable split-shift pattern. There are more details in the letter which appears below this one. You can find out more on their facebook page.
The home care workers have launched a campaign and plan two short two-three hour strikes, each with a focus on rallying support from the public and fellow workers.
The first strike on Saturday 20th January 2018 will include a strike rally at 12 noon in Victoria Square Birmingham to which all trade unionists and the public are invited.
The strike on Tuesday 6th February 2018 will include a rally at 1pm and a lobby of the full City Council Meeting.

NHS crisis
With daily news of the crisis in hospitals, Jeremy Hunt still in post, and constant Tory propaganda for “a different form of funding” (ie getting rid of the basic principles of the NHS), the People’s Assembly and Health Campaigns Together have called a demonstration for Saturday 3rd February in London. Find details by clicking on EmergencyDemonstration.
There are coaches going from West Brom and Birmingham: keep an eye on the Birmingham People’s Assembly facebook page for details. Currently the message is “Coaches are provisionally booked for West Brom, Bham, and Coventry, please contact Sallie O’Prey 0121 647 4832 for reservations.”

with all best wishes
Sue Thomas (Handsworth Against the Cuts)

I am writing to you to ask you to support our 350 home care workers who are in dispute over redundancies and a new rota system. They have voted in an industrial action ballot with 99% voting to strike.
As you will know older people, those with learning difficulties and mental health problems have all seen major reductions in the services to help them because of shrinking budgets.
The Tories have continued to cut budgets for social care and in Birmingham we have gone from a social care workforce of over 7,000 in 2010 to less than 2,000 now.

Councils have been forced to impose steep cuts on adult social care because the money they receive from central Government has fallen substantially. Unlike other services, the social care budget is not ring-fenced. It is in this context that Birmingham City Council plan to make 40% of our home care enablement staff redundant.

They also plan to introduce an unacceptable work pattern with staff being expected to work 3 split shifts in a day. Workers will be expected to work 7-10am 12-2pm and then 4-10pm. The reality is many won’t be able to get home between shifts or if they can won’t be there for long before having to be at their next call so won’t get a break at all. These shift patterns will make people ill and staff fear that they won’t be able to properly function which could lead to mistakes being made in the care of older vulnerable people.

Home care staff work across the 365 days of the year doing shifts that cover from 7am – 10pm. Many provide this service on foot, working in all weathers. In 2012 the then Tory Council removed the pay that home carers received for weekend working meaning everyone had a huge pay cut, with many losing up to £5,500 per year. Home carers are grade 2 and earn between £15,823 and £18.560 a year, much less than the average wage. Many had to take on second jobs to survive.

The home care service has changed from one where staff provided a long term care package to one where they visit and care for people for the first 6 weeks that they leave hospital, this is called an enablement service. Staff have up to 6 weeks to try and help people live independently in their own homes. It is a vital service and more complex than in the past as service users are more vulnerable and have higher care needs.
We believe that all workers should be entitled to a reasonable work life balance and everyone receiving social care should have that care provided by someone that has the time and energy to do a professional job.

We have been trying to get the council to withdraw the proposed rotas and work with us and the staff to draw up a more acceptable work pattern.
Staff also feel that they should be paid a premium for working weekends – like NHS staff are. They have asked management to start to pay them for their travel time in line with the new legal ruling on working time. They have also asked the council to sign up to UNISONS Ethical Care Charter- which talks about how councils work with private sector home care organisations to ensure their staff are paid properly and not forced to work zero hour contracts with unpaid travel time.

Our members love their work and want to provide the best care they can for our most vulnerable citizens. But staff know that if they are forced to work the new rotas they will be left exhausted and will have no time to recharge their batteries, it will make the job that they do so well so much harder. Striking is always a last straw for care workers but they are fighting for the future of their service as well as for a fair and just system of work. They have already had massive pay cuts and should not be driven from their jobs to pay for a recession caused by greedy bankers and their backers the Tories. The race to the bottom in the care industry has to stop.

We are asking your branch to support our member’s dispute and back their case for fair work practices and a work life balance for low paid women. They are also fighting to ensure that no staff are made compulsorily redundant. Members would love to receive a message of support from your branch and if you are able to make a small financial donation to our strike hardship fund we would be really grateful.

 Please send messages of support to info@birminghamunison.co.uk
 Please make cheques payable to Birmingham UNISON and make it clear that it’s for the Hardship Fund