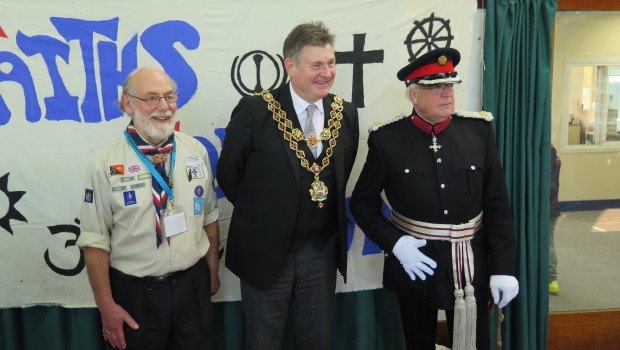 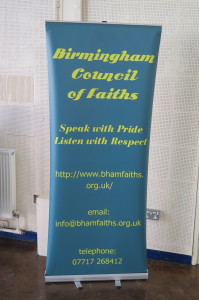 Hall Academy, and demonstrated that the real story was about volunteers in the Birmingham Council of Faiths and the local Scout movement, combining to help Junior age children from different faith communities to find common ground and to understand differences. Even more it was about the children themselves – 50 of them from all over Birmingham, who took the fun seriously, but also worked hard at taking in a lot of information. It is one of a range of such initiatives with young people (click on Inter-faith Youth Projects), and its strength is in the way a shared interest (in young people’s welfare and development, and scouting) enables people from different backgrounds to form bonds which surmount the potential for division. Peter and Jean Rookes have used their interest in both scouting and inter-faith dialogue to drive this initiative, and to an outsider this year’s event looks like a memorial for Jean Rookes, who died in December 2016;  it is clear that her work lives on. Peter Rookes is Scout County Faiths Advisor and Secretary of Birmingham Council of Faiths.

The ‘parachute game’ provides a warm up and, if you want to view it that way, a parable of how 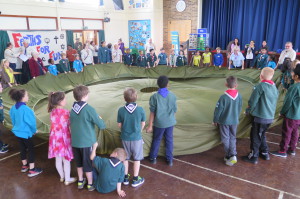 belief of whatever kind works in the world. At a recognised signal a number of children have to go under the parachute and navigate to the other side – sometimes in light (from the central hole in the chute or from the far side), sometimes in darkness as the material sinks enveloping heads and limbs, and sometimes colliding with others who are groping their way along their own route. John Bunyan would have used this metaphor if he had known about parachutes!

The children then progress in groups round different ‘stations’ where they 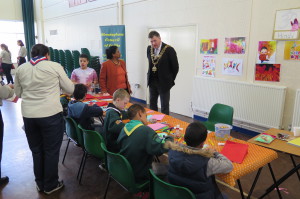 spend 15 minutes learning some of the key points of each religion (Sikh, Hindu, Christian, Muslim, Buddhist, Baha’i and Jewish)  through fun activities. Their leaders and mentors for the day are often from a different faith to themselves, and they get a chance to see how these people have the same qualities of 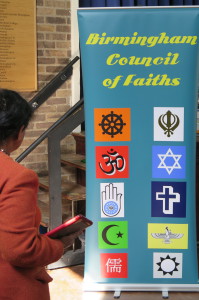 empathy and understanding as the carers they are used to.  I joined some of them to do a walking meditation round the Buddhist station in the gym, focusing on the sensation of my foot through my sock and shoe into the firmness of the floor. One member of the group realised that instead of wasting a lot of time daydreaming she had in fact been meditating, which could prove a useful alibi at some point in the future. The Lord Mayor (Councillor Carl Rice) and the Deputy Lord Lieutenant (David Bradnock) both got stuck into dialogue of their own with 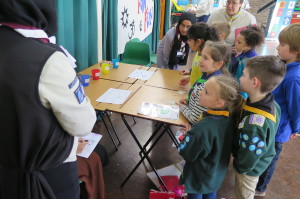 the different groups, and the Lord Mayor could be heard speculating on the ontological significance of his appendix, which was separated from his body when he was 19 – he also gave a great speech, in which he laid down the philosophy of ‘treat people as you yourself would want to be treated’ as the basis for a peaceful and harmonious city. The Deputy Lord Lieutenant is County President of the Birmingham Scout Association, and almost never fails to commit his time to events for young people like this one. Both distinguished themselves with their lack of ceremony. Peter Rookes oversaw all and tweaked as necessary.

Recently, at Shambhalla Village in Handsworth, we discussed how to overcome the separation between faiths and cultures. This event demonstrates how a shared focus on an issue of compelling interest can help all generations not just to learn about each other, but to be delighted at the discovery of common humanity.