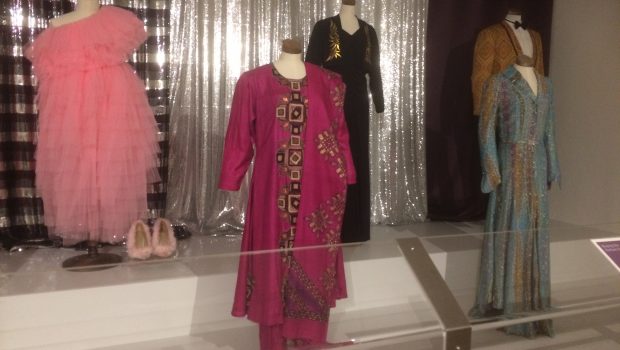 DRESSED TO THE NINES & POWER TO THE PEOPLE

As Handsworth is such a vibrant and creative place it comes as no surprise to find it featured in two temporary exhibitions at the Birmingham Museum and Art Gallery. The first is “Dressed to the Nines,” which celebrates the important part clothes play in special occasions or just in going out and having fun with friends.

There are varied outfits on display, spanning well over 100 years, as well as a cabinet of shoes and boots, some dating back to the 19th century. Alongside a formal court outfit that Neville Chamberlain wore in the 1930s, there is a stylish Dior dress from the 1950s, a sparkly maxi dress from the 1970s and a bright pink salwar kameez from the 1990s, purchased on Soho Road. 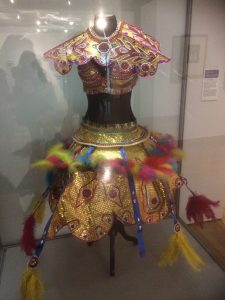 Taking pride of place is one of Professor Black’s fabulous carnival costumes, whose resplendent colours brighten the whole room.

As well as clothing there are drawings and paintings from the Museum’s collection and a very entertaining slide show of photographs that Birmingham people have contributed to.
Yet again Handsworth features in the photography section – with works from both Claudette Holmes and Vanley Burke on display.

The second exhibition is entitled, “Birmingham Revolutions, Power to the People.” It covers all sorts of protest and activism, from the overtly political to the more cultural, both locally and nationally/internationally.

This exhibition spans many decades and even centuries – there is a display about the “Priestley Riots” in the late 18th century, which lasted for 4 days and resulted in 9 deaths. These were reactionary riots against liberal free thinkers and supporters of the French Revolution. Once again there is a Handsworth connection, as many of these free thinkers were members of the Lunar Society, who used to meet in Soho House. 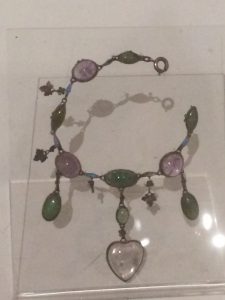 Banners, pamphlets and other artefacts from the 19th century Chartist movement can be seen, including a beautifully decorated but rather horrifying police truncheon. There are also items relating to women’s suffrage, including a lovely bracelet in the movements’ colours, which was made by a sympathetic company in the Jewellery Quarter.

Moving on to more recent times, there are displays on trade union actions, in particular the miner’s strikes of the 70s and 80s and political campaigns such as CND (Campaign for Nuclear Disarmament), Anti-Apartheid, LGBQT+ (Lesbian, Gay, Bisexual, Queer, Transgender etc) and Disability Rights.

Handsworth features prominently in the “Power in the Community” section, for both political and cultural activities. The work of the Afro-Caribbean Self-Help Organisation is celebrated and there is a cabinet which serves as a reminder of Handsworth’s many great achievements. It includes Eunice McGhie-Belgrave’s Pride of Britain award, in recognition of her work with young people (for which she also gained an MBE), Benjamin Zephaniah’s typewriter and a guitar belonging to Basil Gabbidon of Steel Pulse. 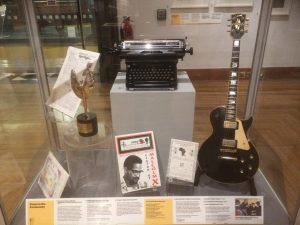 Both exhibitions show how much there is to be proud of in Handsworth and they are well worth a visit. They are running until 4th September 2020 and with free entry there’s no excuse not to go!
https://www.birminghammuseums.org.uk/bmag/whats-on