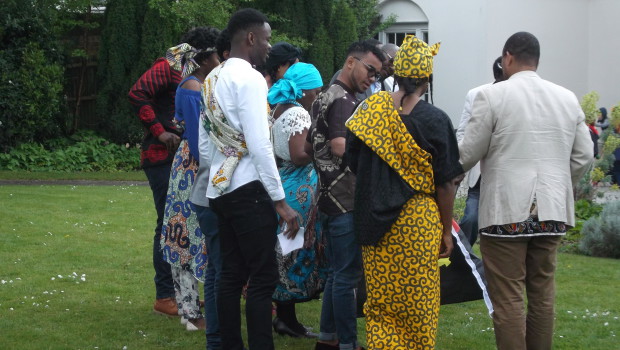 The names in the text of Eddy Aigbe, Kaleem Hussain, Seiko Susso, Ahmed Magare, Piers Road Centre, Birmingham Opera Company and Our Roots Childrens Choir can all be clicked to go to further details. 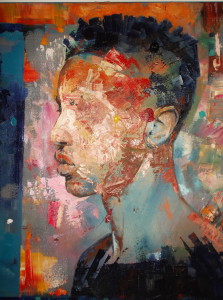 The title of Eddy Aigbe‘s migration-inspired painting was in my mind as the Piers Road New Communities Centre exploded into Soho House and garden for its 10th anniversary celebration. I started talking to Kaleem Hussain (we had never met before) because I thought he had arranged the music. He hadn’t, but called it ‘the harmony of the heart’. Seiko Susso played the African Kora and sang, subtly counterpointing melodic lines, as a bewildering 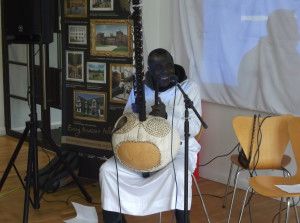 mix of nationalities, ages, styles and languages began to fill the room. The conversations were intense, but beneath you could see the almost unconscious movement of feet, legs, fingers and flickering smiles as the kora’s rhythms became more insistent – a mesmerising sound, at once nostalgic, melancholic, hopeful, and unrelenting, repetitious but always different, illuminating both the memories and potential gathered there.

I bumped into Nadia and she introduced me to Nima: staging an exhibition on 6th May called ‘The Bright and Dark Colours of My Life’ (Regents Park Banqueting Suite, B10 0QP 12pm) – testimonies of Somali women, 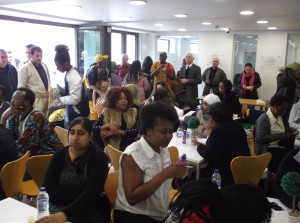 sometimes of female genital mutilation, accompanied by the art of Ahmed Magare. A friend from Syria tapped me on the shoulder and spoke to me about a lawyer from his country, sitting across the room with a group from Kurdistan, who had set up to provide advice for people who needed it. Here was the situation being reached for at the recent ‘Breaking Bread’ events (click BreakingBread): immigrant groups helping their ‘own’ people, but also forming friendships and alliances across boundaries of culture, language and religion.

The Piers Road Centre grew out of an alliance between former councillor Dennis Minnis, the Family Housing Association and Birmingham University. They carried out a survey in North West Birmingham in 2005-06 to see what support networks existed for newly arrived immigrant groups – there weren’t any. More specifically, there was nowhere for potential support groups to meet, leaving them only parks, 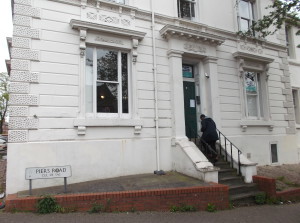 the streets or maybe a front room. So they set about securing premises, and found the current building on the corner of Piers Road/Soho Road. Here, with funding from charities like Barrow Cadbury and the Rowley Trust, they provided space for groups to use as they wish. Currently there are 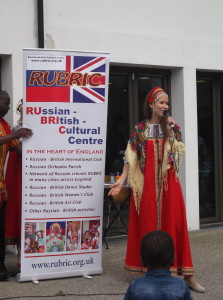 groups from: Angola, Burundi, Eritrea, Ethiopa, Kurdistan, North Sudan, Russia, Somalia, South Africa, South Sudan, Uganda and Zimbabwe. Dennis Minnis has the role of Project Manager, and for this and a range of other work (not least helping drive the City of Sanctuary campaign) he has been awarded the OBE for services to community cohesion.

The Lord Mayor (‘this epitomizes what is good about this city’), and Lady Mayoress, clearly felt at home in what they described as the most diverse and welcoming group of people they had met, and posed for pictures with everyone. Birmingham Opera Company performed, Our Roots Childrens Choir entertained in the garden, and Soho House provided the backdrop for another vibrant coming together.