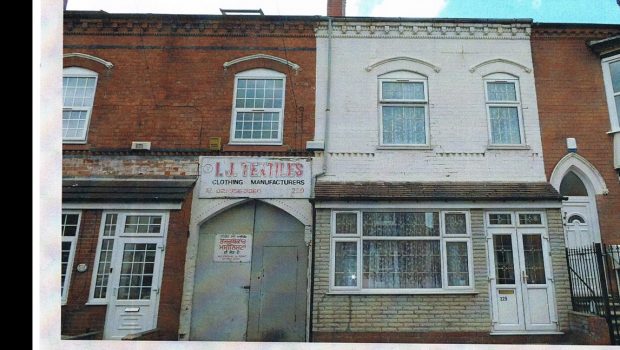 Early in 2020, residents in the Westminster Road area of Handsworth noticed this property for sale. 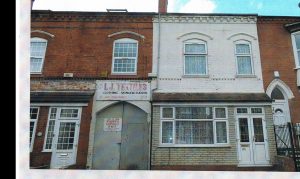 Here it is: a modest two storey terraced house in Westminster Road, which once had a small sewing machine factory built in its back yard. The asking price was ‘in the region of £600,000’. Six hundred thousand pounds.

But why should anyone pay over £half a million for such a house?

The answer lies in this sign, because 17 bedrooms signals the possibility of great profits, mostly at the cost of the 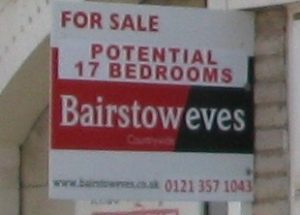 taxpayer.  The agents are advertising its potential as an HMO (House in Multi-occupation) – a final decision by the Planning Committee is expected by the end of August.  The owners have converted the narrow factory building at the back into 8 tiny bedrooms with minute kitchen and four showers to be shared by the tenants. No living room. No outdoor space for them or the occupants of the main house.

17 single people on housing benefit of £67.00 per week each will bring you £59,000 a year in rent – crude payback time 10 years.  But what if you claim that your seventeen bed HMO is supported/exempt housing [1] (housing for people in need of support: refugees, victims of domestic abuse, ex-prisoners, people with mental health difficulties and misusers of alcohol and drugs)? Then you will get an additional £170 per person (many properties charge much more than this) per week and your income will be around £150,000 per year – payback time 4 years.  There will be some outgoings, but the less you spend on them the greater will be your profit.

In 2001, in Birmingham, private rented housing accounted for just over 10% of all households in the city but by 2018 the size of the sector had trebled to 33%, about 85-90,000 properties. A significant part of this increase is the growth in HMO’s and unregulated ‘exempt accommodation’ supposedly providing care to people living in shared accommodation. This is a problem which is affecting every area of the city where there are large houses that can be divided into single rooms and where local residents do not have enough clout to prevent the spread.

In 2018  it was described by a Senior Officer responsible for the Private Rented Sector (PRS) as ‘A runaway train’.   Today we might liken it to an out-of-control virus.

Why does it matter?  It is because at the lower end of the market it provides the worst quality housing to the most vulnerable people at the highest and most wasteful cost to the public purse. Also because in localities like Handsworth, which still have many large properties, this growth of HMO’s is destroying the neighbourhoods, driving house prices up out of reach of local families whilst it enriches to a completely unreasonable extent those who become the landlords

A review commissioned by Birmingham City Council Safeguarding from Birmingham University in 2018 (‘Risk, Safety and Wellbeing in Shared Exempt Accommodation‘) said there were then approximately 10,000 units of this supported accommodation in the city. At their then estimate of £227 per person per week, this amounts to £2,270,000 per week from taxpayers to landlords. That is £118 million per year in Birmingham alone.

The landlords do not pay business rates. Some get one of the tenants to be the named council tax payer (it will be paid for by benefits), retaining their names for proof of ownership only on the water rates register. They do not pay for trade waste collections. It is extremely likely that they are not paying full income tax on their incomes from renting. 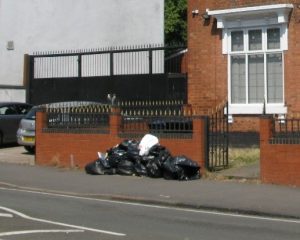 Rubbish piles up outside the properties or is dumped at the landlord’s suggestion in plastic bags in the street.

National Agencies place their clients with no Birmingham connections in the shared houses. At auctions in Liverpool, Housing Associations have been selling off their Handsworth properties to private landlords, having first required their tenants to move.

This truly frightening situation is the product of Tory Government policies. They have removed so many controls and made such savage cuts to local authorities and to those who might once have provided specialised accommodation that the Labour City Council is not in a strong position. There is a team of just 22 staff for the whole of Birmingham to deal with every aspect of private renting. Lack of resources prevents monitoring, investigation and even the possibility of an up-to date register of HMO’s.   This team has been concentrating on extending requirements to register properties of 5 beds or less, recently implemented city-wide.  And, along with this there is now a requirement for HMO’s to obtain Planning Permission – previously small HMO conversions didn’t need it. This is a great achievement by Sharon Thompson (Cabinet Member for Homes and Neighbouroods) and her team but there is so much more to do.

And the residents have got some great ideas for how the problems could be tackled, through joint working between the local people and the City Council in accordance with devolution policies.  Awareness is needed first; then serious political determination.

[1]  The term “Exempt Accommodation” came into being in 1995 as a means of identifying types of accommodation that were exempt from what was known at the time as “Local Reference Rents”, which capped the amounts of rent that private landlords could charge. Provisions were reinforced when the terms of Universal Credit were determined in 2012.