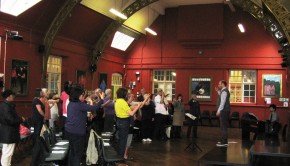 A business school, in the form of a distinctive double decker bus, will be encouraging students to climb aboard on […

A 16 year old school girl from Handsworth, Birmingham has been announced as a top contender for one of the […

The Future is Local: the launch of the Lozells, Birchfield and Handsworth Community Trust

The launch of the Lozells, Birchfield and Handsworth Community Trust drew an audience of 80 people to the Methodist Community […

Yann and Matloob are an unlikely couple: one tall, skinny and white, the other short, stocky and brown; one a […

Aftab Rahman of Legacy WM is developing a new Heritage Trail in Lozells and East Handsworth. As part of this […