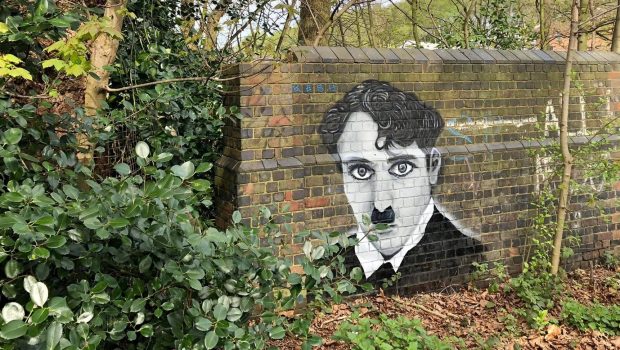 CHARLIE ON THE WALL

‘It was Saturday 16th April, late morning, and I had decided to visit Black Patch Park and pay my respects to Charlie, on his birthday.

Along the way, I called at a friend’s to see if they might join me. They were not at home. I lingered, in case they were just at the shops and would be back soon. I gazed upon the church spire, five minutes away from Black Patch Park. My mother was baptised there. My friend did not show. I proceeded to the Park.

Just as I crossed Hockley Brook, by the Romany memorial, I encountered a young man who asked “Do you know of any walls in the park ?”

I told him to follow me and showed him to the only piece of wall that I knew of, facing Perrot Street. 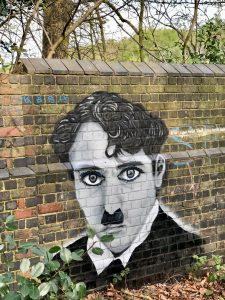 By now he had declared his interest in Charlie and his desire to portray him.

This felt like synchronicity. If I had not tarried at my friend’s house we would have missed each other.

He eyed up the wall whilst I began to regale him with some folklore about the place.

I also sang him my song “The Ballad of Charlie Chaplin”.

I told Vik [for that was his name] that I had to go home to receive a parcel.

When I returned, Vik had a companion and I had a bow saw for further clearance and visibility of the ongoing portraiture.

We three had a fine time through to the evening. Vik kept saying what a wonderful time he had had [!!].

He bought me a drink at the Soho Foundry Tavern as we enjoyed the party celebrating Independance Day for Zimbabwe.

We exchanged details and Vik said he wants to return and finish the wall. I have left messages but, so far, no replies……………’