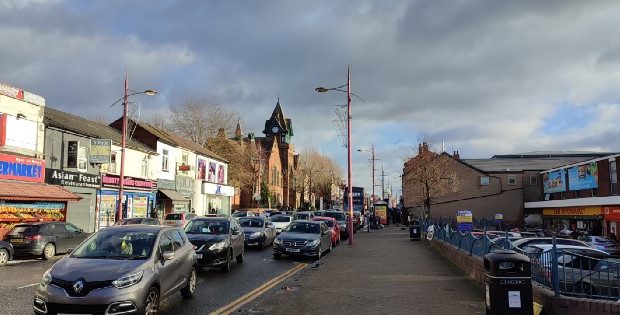 Based in the North of Birmingham, it was a peaceful rural town, a manufacturing suburb during the Industrial Revolution and is a vibrant multicultural place now.

“‘There’s more to Handsworth than crime’ — Twins attract crowds in lockdown with park gym”, says an article in the local newspaper, The Birmingham Mail, about a couple of twins who gathered locals to exercise outdoors during the lockdown.

If you see how the media portray the area, you can understand the brothers’ complaints.

Some critical issues cannot be denied: there have been riots, gangs operating in the area, deprivation and poverty are significant issues. But, it is not the only reality of Handsworth.

The area also has a rich cultural heritage. The neighbourhood was a vibrant place that was crucial during the beginning of industrialisation. Saint Mary’s, the Westminster Abbey of the Industrial Revolution, is a good example.

And, Handsworth has become a multicultural place where everybody has been welcomed, which has enriched the area.

A place for everybody

Birmingham and Handsworth have been home to people from all over the world for almost two centuries.

Irish, Italians and Polish arrived in Birmingham throughout the 19th and 20th centuries.

Afro-Caribbeans, mainly Jamaicans, came to Handsworth during World War II to work in the arms factories and post-war to rebuild the UK or work in the public services such as the nascent NHS

Later, the neighbourhood welcomed people of other nationalities and ethnicities. Indians and Pakistanis arrived and settled in Handsworth at the end of the ’50s, which extended throughout the ’60s.

In the last years, Eastern Europeans and people from Africa and South Asia have chosen Handsworth as their place to live. And Afro-Caribbeans, who were predominant in the neighbourhood, became a minority in the area.

In the latest available census, 2011, more than 60 per cent of the population was ethnically Asian, with Indians predominating, 24.5 per cent Indian and 21.4 per cent Pakistani.

Almost one in five of Handsworth’s residents were black, with Caribbean people being the most prominent ethnic group, accounting for 11.2 per cent of the total.

The white ethnic population is 11.5 per cent.

Growing up in the 70s and 80s in Handsworth

Sharon Duggal, a writer with an Indian background, grew up in Handsworth during the 1970s and 1980s. From that experience, she wrote a book called Handsworth Times, fictional but based on her experience of growing up in such a neighbourhood.

Asked what those years were like, she recalls: “Music was very prevalent everywhere: reggae from the sound systems and blues parties but also Indian music from shops and restaurants and pop music from radios and Top of the Pops”.

From this environment would emerge groups that would become internationally famous, such as Steel Pulse. Their first album, released in 1978, was a declaration of intent and perhaps a premonition of what was to come: Hansworth Revolution.

From Handsworth are also musicians like Pato Banton, Jamelia, Apache Indian, the bhangra groups like Swami or B21, the percussionist Carl Palmer or one of the members of Black Sabbath, Tony Iommi.

Also growing up in Handsworth were poets like Benjamin Zephaniah and photographers like Vanley Burke, who has photographed Handsworth over the years and travelled internationally photographing black people.

In 1981, as in many other towns in the UK, riots broke out in Handsworth throughout the summer and would be repeated in 1985, and they would be much more widespread and violent.

It all started over a minor issue, as the Birmingham Mail recalls in this article. A policeman saw that a car was badly parked and went to give him a ticket.

When he got to the car, he saw that the tax disc had not been paid. So the policeman arrested the owner of the vehicle. That stirred up the people in a nearby cafe while the policeman called for backup. The riots began.

The riots went on for a couple of days. Duggal recalls: “I was not present at the actual riots. We lived very close by, and you could see the glow of fires and the noise in the distance”.

In one of these fires, two brothers who ran a post office and had stayed inside to defend their property were killed. No one was arrested.

Damage was valued at millions of pounds, and more than 420 people were arrested in connection with the riots.

From the riot, there is a documentary: Handsworth Songs, from 1986, directed by John Akomfrah, which shows the whole story of the riots.

Why did the riots occur? Duggal recalls that many teenagers were tired of being subjected to stop and search by the police, which affects mainly people from minorities, especially Afro-Caribbeans.

An article from Birmingham Mail explained the origins of the riots in 85:

Geoffrey Dear was approached to talk about the riots of 1985, but he did not reply.

At the time, the unemployment rate in Handsworth was 36 per cent, three times the national average and the worst in Birmingham.

A few weeks ago, The Times published an article about the property market in which it highlighted several areas of the UK that have been no-go zones and where prices have been rising in recent years.

According to the newspaper, these are good areas to invest in because house prices were set to increase in value over the next few years, and there were already signs of strong demand. Handsworth was on that list.

The price of an average house in Handsworth is £158,350, with an annual growth of 13 per cent and 42 per cent growth in the last five years.

Shamir*, a worker in one of the real estate agencies operating in the neighbourhood, adds that single-family houses that could easily be rented for 500 or 600 pounds a few years ago are now priced at a minimum of 800 pounds.

The estate agent believes it is a phenomenon that affects Handsworth and Birmingham in general.

Beyond The Times article, Handsworth faces some of its old problems.

In the last year and since the COVID pandemic began, the crime rate has gone up 87 per cent in the area, especially in Handsworth Wood.

West Midlands Police was approached to comment on data, but it did not respond.

However, in an article in The Times, Simon Foster, the West Midlands Police and crime commissioner, said rising school exclusions and cuts to youth services and policing have left “vulnerable young people at increased risk of becoming victims of crime”.

The council provides some of these youth services, and many have closed due to the council’s lack of funding over the last decade.

The local councillor, Hendrina Quinnen, and Birmingham City Council were approached to comment, but they did not respond.

The local MP, Khalid Mahmood, was approached for this article, but he did not respond.

The People of Handsworth know that

Steel Pulse has a song called Handsworth Revolution in an album of the same name, which starts with these lyrics:

I say the people of Handsworth, know that/
One hand wash the other so they say/
So let’s join hands my bredren/
Make the way for our children/

Thus, some people try to face the problems and improve the neighbourhood. Hector Pinkey, aka Mr Handsworth, is a good example.

In 2017, in recognition of the Windrush generation that improved and renewed the neighbourhood, Luke Perry created a statue inspired by Luke’s family friends’ epic sailing trip from Jamaica to the UK on the SS Journey.

Mr Handsworth, a local hero, was chosen to be the model for the statue that can be visited in Handsworth Park. He has worked for the community for many years and runs a karate club every Saturday in the park.

John and Gaelle, who have lived in the neighbourhood for the last 40 years or so, have helped the community in the last few years and run Inside Handsworth, an online magazine and a Facebook page to “give local people a voice in the wider Handsworth community in Birmingham”.

Another person who wants to make Handsworth a better place is Michelle Helsby, who has a son in prison for robbery after being involved in gangs.

After the death of Keon Lincoln, she created a campaign called Forever 15 to provide the young people of Birmingham with a safe place to interact and enjoy recreational activities.

Thus, step by step, the people of Handsworth “join hands my bredren/
Make the way for our children”.

This  article was written by Tony Jarne and was first published on:
https://medium.com/@antojarcu/a-place-called-handsworth-49655f77b187