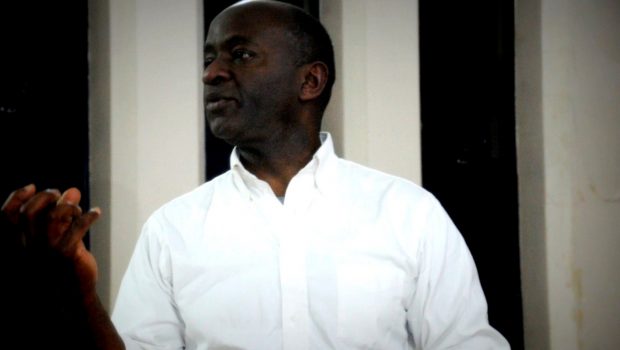 “CALL MR ROBESON” – A POWERFUL TALE OF A REMARKABLE MAN

On Saturday 29th February St Andrews Sports and Community Centre resonated with the sweet music of Paul Robeson, ably sung by Tayo Aluko, as part of his play, “Call Mr Robeson.” The show was the latest offering from Handsworth Socials, a group who regularly organise social and cultural events at St Andrews.

Those of us who were lucky enough to get a ticket for this sold-out event were treated to an outstanding performance from the very talented Tayo Aluko and his accompanist on the piano, Rowland Cotterill.

The play tells the story of Paul Robeson’s life in a compelling and dynamic way. Tayo Aluko seemed to be channelling the spirit of Robeson, as his portrayal was so vivid and moving. The range of the play is broad and ambitious – it covers Robeson’s personal, professional and political life, revealing his many talents as a singer,

actor, athlete and scholar – he was an expert in musicology and linguistics (he spoke over 20 languages!)

The main thrust of the story however is Robeson’s passion and commitment to racial equality, fairness and social justice, not just for black people in the USA, but for all oppressed people all over the world. He fought against segregation and championed civil rights long before the movement even had a name. Among many stories is the time when Robeson, at the height of his fame, was performing to huge enraptured audiences, yet he wasn’t allowed to eat in the hotel restaurant because of the colour of his skin! Or the time he stopped a concert mid-way in furious indignation, when he realised the audience was segregated.

Rather than stick to the ‘easy’ repertoire of a successful singer, opera performer, Shakespearean actor and film star (he was cast in a number of Hollywood films in the 30’s and 40’s) he chose to put his talents to work singing for workers in many different contexts. His realisation that it was not just slavery (his father was a freed slave) 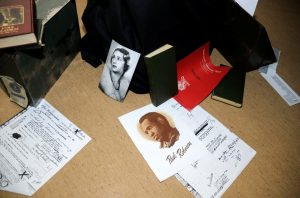 and racism that had to be confronted, but also exploitation of workers of all colours around the world, was awakened while on tour in Britain. In the 1930’s he met a Welsh miners’ choir, whose hunger march had arrived in London, and with whom he felt an immediate and life-long connection. He paid a heavy price, as he became unbookable at home in the US – and the authorities confiscated his passport, meaning he was unable to tour abroad for several years. Brilliantly he sang for a large outdoor Canadian audience – the stage on the US side of the border and the massive audience in the field next door – in Canada!

Robeson refused to compromise his principles even to the detriment of his career and health, when state harassment made it difficult for him to work and ultimately led to mental health problems. There is a powerful scene in the play when Paul Robeson is called to appear before the House Un-American Activities Committee in the 1950’s, and though his mental state is not good he finds the courage and inspiration from ‘Mother Africa’ to speak out and shame his inquisitors. The use of recordings from the actual hearing gives this scene added authenticity. 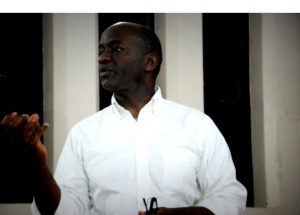 Tayo Aluko brought Paul Robeson to life in his well-rounded portrayal of a truly remarkable and inspiring man.

After the show, Tayo stayed for a Question and Answer session, which gave a chance for some of the audience to share early memories of hearing Robeson on the radio, or even attending live performances – he came to Britain on tour a number of times. It was fascinating to hear how a chance remark comparing Tayo’s singing to Paul Robeson’s led him to research Robeson’s life and eventually write the play. It has since toured all over the world to critical acclaim.

When asked what inspires him most about Paul Robeson, Tayo talked of Robeson’s refusal to give up despite all the difficulties and personal suffering this brought

him. Tayo explains, “He showed that almost anybody can do extraordinary things.”

Meanwhile the Handsworth Socials team are busy putting together the programme for the next event (on Saturday May 2nd) at St Andrews, which will be a May Day celebration evening with local musicians, Handsworth Community Choir, comedy from Naomi Paul, poetry, short films, together with refreshments, a short fun quiz etc – all rounded off with a set from the wonderful Daholl Kurdish Band led by the brilliant Zirak Hamad, master daff (Kurdish drum) and fiddle player. Another great night of local entertainment in store at St Andrews. You can reserve tickets (£3, £5 or £7 – you choose) for the May Day celebration event by emailing mogstim@hotmail.com  Get in quick, before they sell out again!

‘Handsworth Socials’ don’t get funding from outside sources, they just cover costs via ticket sales, raffle etc. Coming to the May Day social (invite some friends for a great local night out!) will help keep the show on the road, bring loads of locals together and help put the communal back into Community!

With supplementary text by show organisers Mogs and Tim Russell-Hollins.

Headline and set photos by Margaret Jeffers-Carter. Other photos from the show’s website. 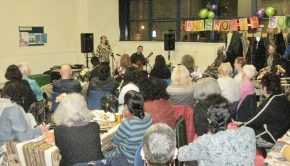