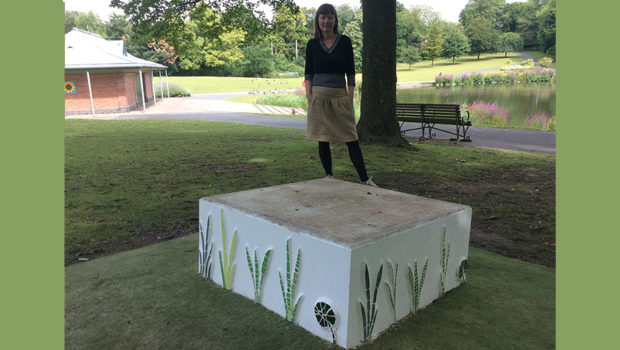 As part of the Handsworth Park Arts Trail (HPAT) 2017 which launches next week, local park artist Scylla Magda , on behalf of  Perry Barr Arts Forum, is curating a number of artworks on the lakeside plinth.

The first artwork, Grass Mosaic has been designed by Scylla with the aim of ‘beautifying’ the concrete plinth which was left behind after the Big Hoot Owl flew away in 2015. Grasses and leaves found around the lake were used as inspiration for the design, in order to create an artwork that looks natural and organic, enabling the plinth to blend in with its surroundings. 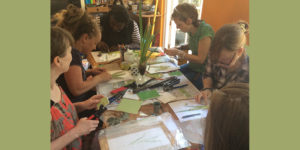 The mosaic was created in collaboration with members of new local community arts group Crafting Community, who received a training workshop with professional mosaic artist Sophie Handy, before embarking on the creation of the grass mosaic.

The mosaic forms a permanent artwork on all four sides of the plinth, providing an attractive base for further temporary artworks which will be displayed the top of the plinth.

Look out for the second artwork on the plinth, by Karoline Rerrie, which will be installed  in time for the HPAT opening on 6th October, when the two main commissions for this year, permanent artworks by Pauline Bailey and Luke Perry, will be revealed.

Illustrator and printmaker Karoline Rerrie has created a hand made, screen printed vinyl poster artwork which reflects nature in Handsworth Park throughout the four seasons of the year, and which is also a visual representation of the text ‘Handsworth Park – Beautiful All Year Round’.  Karoline’s work is inspired by Eastern European Folk Art and often include stylised images of nature, animal and birds. It is hoped that this artwork will remind people that Handsworth Park is a beautiful place to visit all year round, and not just over the summer months.