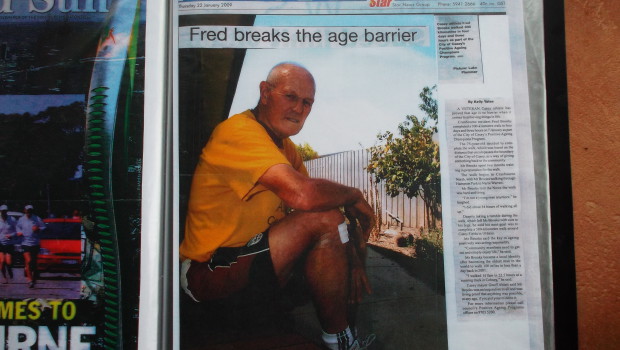 (all pictures can be enlarged  by clicking on them) 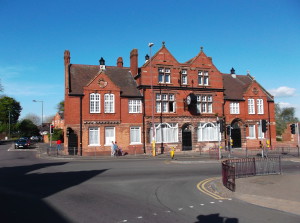 Lozells Harriers (Athletic Club) grew out of the explosion in sports clubs in the area which took place in the late 1800’s. Centred on the New Inns at the top of Soho Road, they trained at times across the countryside which spread out Northwest from there. The 1950’s was one of their strongest periods, with talented athletes like Barry 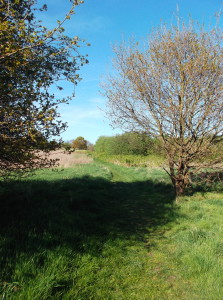 Jackson (Olympic 4oo metres relay) emerging, and later Rosemary Payne (Commonwealth Games Heptathlon gold medallist). Fred Brooks was a promising teenage runner who liked to have a joke at the expense of the race walkers in the club. One day he made a joke too far and had to ‘put his money where his mouth was’ by showing that he could indeed walk 6 miles in under an hour. Having done it he found himself hooked on race walking, and went on to compete at a high level, rubbing shoulders with the likes of 1960 and 1964 Olympic gold medallists Don Thompson and Ken Matthews. At the age of 26, however, living with his wife and young family in Barton Street behind the Aston Hippodrome, he found his wages as a bricklayer (only 5/- per week when work was slow) just weren’t enough to keep them going. So they emigrated to Australia.

Things went well for them after they settled initially in Adelaide, but after some early successes (1961 South Australia champion for the 10k 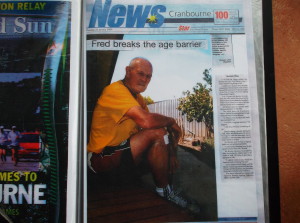 walk) work pressures, and his growing role as coach and then Director of Coaching for the Victorian Junior Football Team, forced Fred to give up competitive athletics. It wasn’t until his late 60’s that he had the chance to try again, and he then wrote himself into the history books. At the age of 68 he became the oldest man in the world to walk 100 miles in under 24 hours (22 hours, 31 minutes and 15 seconds to be precise). Three years later, at 71, be broke the world record for his age group for both the fastest 100 miles (25:37:16) and the greatest distance covered in 24 hours (151.6km). The picture left is at age 75,

having walked the full 300km circumference of his then home town of Casey in 4 days and 3 hours. One of his inspirations was the great Australian ultra-distance runner Bryan Smith, who died in 2001 while competing in the Trans-Australia Footrace. In 2002 The Australian Ultra Runners Association awarded him what he views as his greatest honour: the Bryan Smith trophy, in recognition of his ultra-distance walking achievements in Australia – an acknowledgement, as the first recipient of the trophy, that he had gone further and faster walking than anyone of his age had managed running, while at the same time making huge administrative contributions to the sport. In 2006 he was chosen to carry the baton as part of the Queen’s baton relay for the 2006 Commonwealth Games in Melbourne. 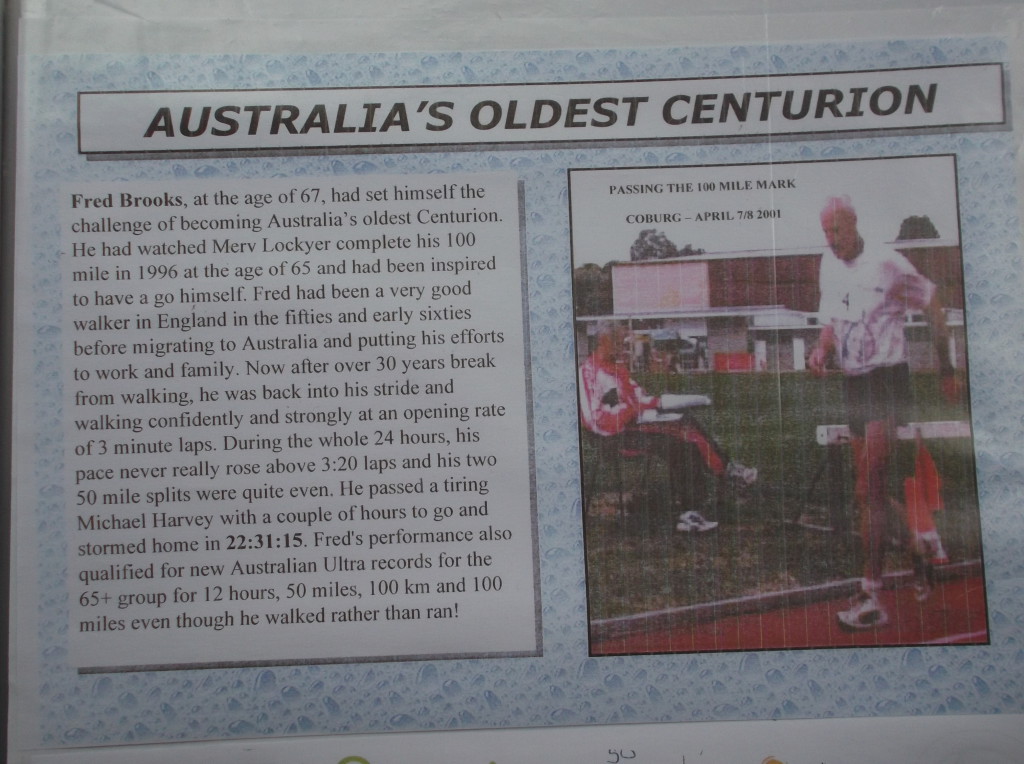 Fred wasn’t just a competitor; even in his early 20’s he was acting as club secretary, and he has retained this commitment to organising all his life. In the same way a club like Lozells Harriers was more than just a collection of athletes – they saw it as their job to link to a 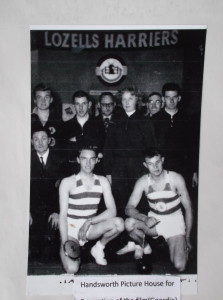 wide range of local schools and to encourage young people to develop themselves through sport. This embedding of themselves in the local community was illustrated in an unusual way in 1956 when the popular film ‘Geordy’ (about a Scottish hammer thrower) was showing at The Regal cinema on Soho Road. The club were asked to attend a performance to demonstrate what hammer throwing, and athletics more generally, was about. Sadly, it may have been their commitment to remaining local which led to the club losing out to bigger clubs, who could use their better facilities and competitive opportunities to recruit ‘ready made’ stars both locally and from further afield.

Lozells Harriers were wound up in 1991. Fred Brooks’ wife Lill died in 2009, and in 2011 he brought  her ashes back to Birmingham as she had wished and decided to stay, so that he could visit all the parts of the UK he had never seen. He is currently busy completing the Lozells Harriers archive record. The trophy he is holding on the right below is the Bryan Smith trophy, and the one on the left the Golden Boot award for best performance at the Australian 48 Hours Championship in 2005 when he set his age 70-74 world records. 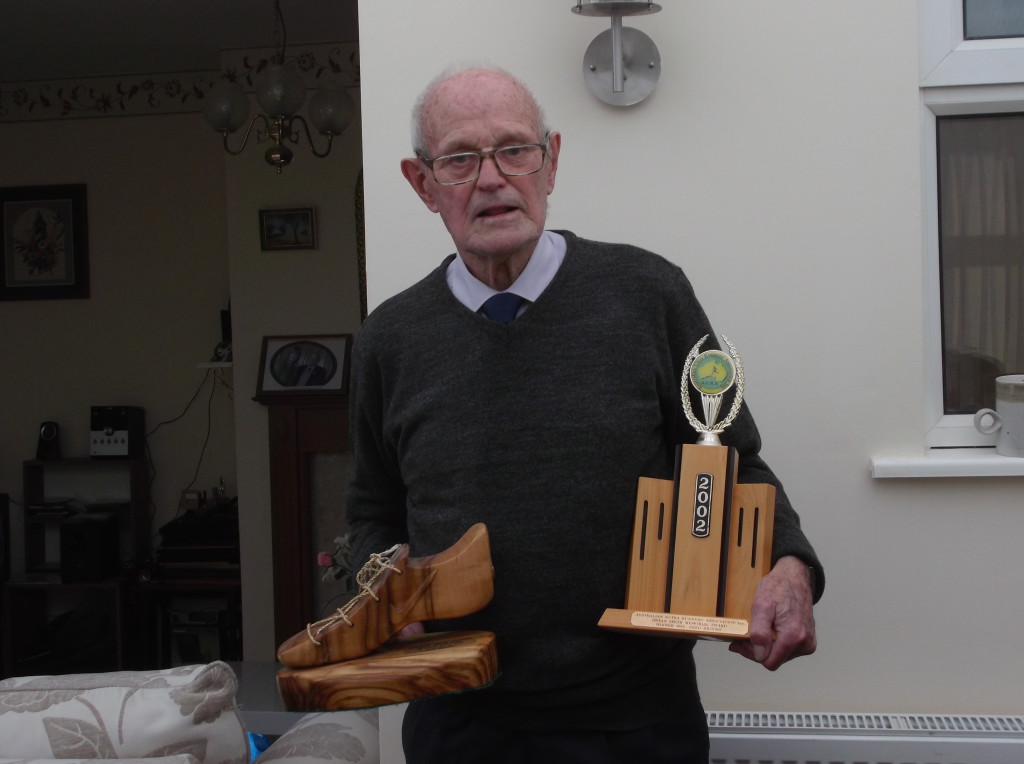 3 Responses to THE LOZELLS HARRIER WHO CONQUERED AUSTRALIA