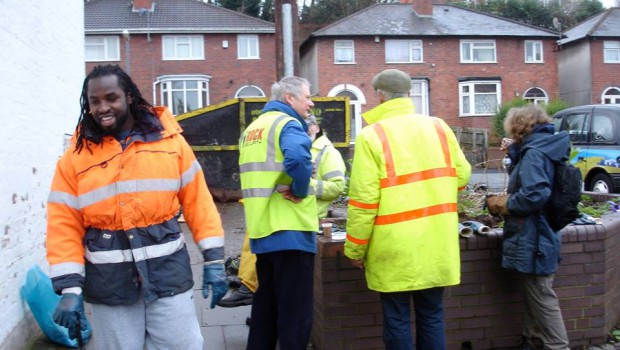 What’s abandoned and not abandoned tells much about local and global economies. Once upon a time it was worth it for sellers of bottled drinks to pay people (often children) to return empty bottles. It meant fewer soft drinks containers littering the streets. One of the things that strikes anyone collecting street waste is the sheer amount of alcohol being consumed in the area – not beer but liquors of every kind.

Right now far less discarded metal is collected from the street. Why all these fridges? Disposing of them is no longer free to householders. The manufacturers encourage consumers to change fridges more frequently. There’s money to be made from the metal innards of fridges, especially the copper coil in the motor. Now that’s less likely to be the case and though people are still dumping fridges, we find fewer ‘gutted’ ones. Why do we see far fewer discarded ovens or washing machines? Because suppliers at point of sale are throwing disposal of your old model in return for delivery and installation, which entails plumbing for washers and wiring in direct for all but very small stoves. Fridges and freezers are just plugged in.

Why so many clothes and other soft materials left lying around clothes recycling bins. There’s a market for old clothes often discarded in good condition, and people just want free clothes for themselves and their families. Going through discarded clothes, people select what they want and leave the rest on the pavement.

In our area, not many people want wood. I have delivered wood cut by Railtrack maintenance workers to a wood-stove owner in Handsworth. I use such wood for our wood stove, but there are not many wood stoves around – getting ones efficient enough for accreditation in a smokeless zone tend to make gas cheaper.

We wonder at how much expensive baby equipment is either dumped or given to Handsworth Helping Hands (HHH) as donations. This stuff is not cheap, but even less well-off people like to pay for new things for a baby. We got second hand push chairs for our children but we met friends who are shocked we did this.

Birmingham City Council Fleet and Waste managers attribute the volume of dumped furniture – sofas, armchairs, beds, shelves, sideboards, wardrobes and other items made of chipboard and MDS – to the high turnover of tenancies and the tendency to buy furniture that doesn’t last long. When a new tenant arrives they also want to clear out everything in close contact with previous tenants. A lot of that ends up on pavements. We know that more of this should be paid for by landlords, but it’s an extra too many seek to avoid.

Rarer items thrown in the street but which HHH has encountered are the big polystyrene blocks that cannabis growers have used to insulate their growing spaces, serving also to hide their activities from the heat sensor in the police helicopter.

Very large accumulations of black bags – a familiar sight in the whole inner ring of the city – suggest the waste disposal methods of tenants a landlord doesn’t wish to be recorded for tax, so that their premises get no, or far too few, wheelie bins.

Add to these issues the vast messiness of trade waste and the low attention given to regulating trade waste licences in our area and you have another major source of rubbish.

We can no longer expect to leave out metal to be collected by the scrap men who roam around HHH street cleaning events – quote from a recent article in the Guardian ‘the bottom dropped out of the recyclable materials market. The global economic downturn means that the global response to “any old UK iron?” is a big fat “no” as scrap metal reputedly plummets from £175 a tonne to a mere £25, plastic prices falling by a reputed £100 a tonne and copper by a huge £1,500 a tonne’.

Members of our voluntary group – Handsworth Helping Hands – enjoy what they do. We live in Handsworth. We care about Handsworth. We work hard and we work as a team. We are even used to thinking that we, our partners and residents, are having a real impact in the area. But more and more we’ve had to recognise that we find ourselves doing the same street clean-ups over and over. We are vexed at how many people seem impervious to change; at how our neighbourhood seems stuck in a rut, remaining an obstinate and notorious mess.  For example, HHH carries out one of its regular ‘Skip-it Don’t Tip-it Days’ in one road, with partners and residents. Afterwards things looks great – for a while. We’re all very pleased – for a while. A job well done – for a while. A few days later, we find the same street that looked briefly as a street ought to look, is again as bad as before people got stuck in cleaning it up.

The same fly-tipping and littering has occurred again, in the same places we picked it up a few days before. We are a small group – 7 of us. We take pride in our local reputation, but we aren’t regulators. We have no authority. We see the same rubbish reappearing and we collect some if it. We resort to the repetitive and often futile labour of reporting it to an overloaded local council.  Knowing all this, experiencing it over three years, the HHH committee decided a few weeks ago to experiment with a shift in approach. We won a grant of £2140 from Birmingham Community Safety Partnership ‘Mobilising Communities Small Grants Fund’.  We selected four avenues – Putney, Brackley, Poplar and Crompton, each with fewer than 20 households, and have named it the ‘4 Avenues Project’. We will strive to engage people in these small places.

We continue to involve our Neighbourhood Office, Birchfield Residents’ Action Group, Midland Heart and Fleet & Waste, but want to do things WITH rather than TO or FOR people. We are learning. So are residents. So, maybe, is everyone involved; learning together about the same intractable challenges that exist in longer streets, in larger areas, but with – just perhaps – a greater chance of doing something about them.

We would really like to balance the disproportionate emphasis on blaming feckless neighbours. There are such people, but just as with crime and health there is more to it. We need to continue to be hard on littering but harder on its causes.