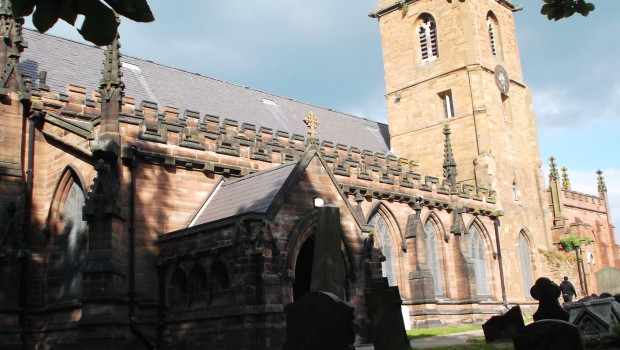 Lots of churches have built community centres; relatively few have seen the church itself as a place to open up for use by all comers. Rev. Bob Stephen and his team at St. Mary’s Handsworth have gone back to medieval times to help them re-imagine the use of the space inside the church. At present most of the room in the nave is taken up by fixed pews purchased  at bargain 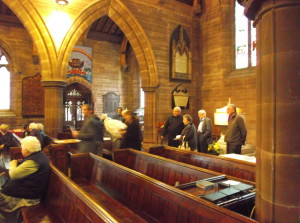 basement prices in Victorian times. Fr. Bob conjures up images of how this space would have been used in the medieval period – for a range of non-religious activities such as markets (this may explain why my co-editor’s dog felt so at home on a recent visit – not to mention the biscuits on offer). It was only the chancel area of the church (the area around the altar) where the ‘religious stuff’ took place – the main body of the church belonged to the people which then, as now, meant anyone living within the parish boundary regardless of their faith or culture. The aim is to return the nave area to community use, while extending the chancel a bit to make it the main area for worship. On Saturday 19th September there was a consultation event to share the provisional plans and seek feedback and additional ideas on how the space should be used.

The proposal is to remove most of the existing pews in the nave, put in a new floor with underfloor heating which will maintain the building at 15 degrees, purchase ‘flexible’ seating which can be re-arranged or removed depending on the nature 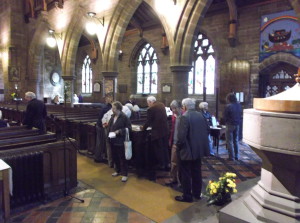 of the event, and open up the space for a range of community as well as church uses. It is known, for example, that the CBSO are interested in using it for local performances, but local groups, schools etc might equally want to use it for their own events. On one side of the nave there would be an exhibition area which would try to do justice to the great leaders of the industrial revolution buried in the churchyard, and to show how the life of the church and that of wider Handsworth have interlinked over the centuries. On the other side a kitchen and meeting room could be installed, with potential to develop a cafe which would be a further stimulus to the development of the church as a focal point for the whole community. Light and colour would be heightened.

There seems to be potential here to make a big contribution to the use of Handsworth’s heritage: for education, for enjoyment, for pride and identity, and for forward looking dialogue about shared values and goals.