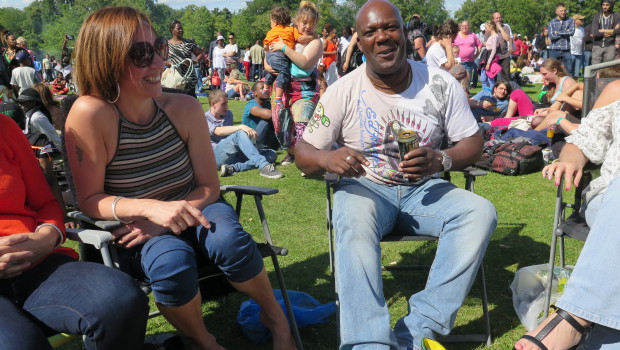 Someone talked about a drone flying over Simmer Down. I think Obama is looking for the secret of what makes Handsworth tick. I came this year half expecting to find a format that had grown tired. What I found was a great affirmation of faith that this event and this place has something to teach about living successfully in a cultural mix – about seeing that mix as the future, not as some kind of problem. The secret was in the small details: the comments of families, the performances of the children, and those of the lesser known artists on the small stage – the clarity of messages coming through.

Nirmal and his family live in Handsworth after moving from Moseley. He said that Simmer Down gave him the same 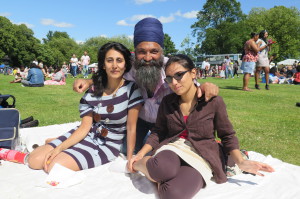 relaxed feeling of integration that he had had at events in Cannon Hill Park. He loved the way it made the best of the park and encouraged everyone to mix – he had some sense that this was needed more these days than when he was a child. He was in France earlier this year for the commemoration of the Normandy landings – a Jamaican came up to him in Paris and began talking in fluent Punjabi. Simmer Down is about these kind of mixes 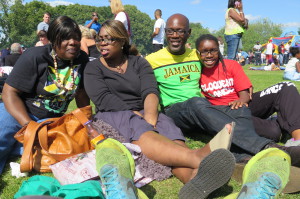 Families from Acock’s Green (their daughter had performed in front of the small stage), Sutton Coldfield (daughter just flown in from Australia), as well as Coventry and Leeds, bore testimony to the wide reach of the festival. They spoke about what a safe place it was to come to, with an atmosphere of acceptance, integration and relaxation. Even the innovation of allowing cars to park on the grass got praise. The Gill family from Coventry said that they always came every year, and had even  more reason to do so now that Coventry’s Caribbean festival had been axed – something which puts a focus on the succcess of the Simmer Down Community Interest Company in continuing to find funds year after year.

Coming back late on Friday night from the Jewellery Quarter Festival, I bumped into Colin on Hamstead Road as he was trying to give his dodgy knee some exercise. He talked about being born and growing up in Handsworth for the last 57 years – staying even though a family inheritance in Jamaica would make him a rich man if he moved there. He talked about unionism and the Tolpuddle Martyrs, about how when he was a child you used to be able to walk all the way up Holly Road under trees on a hot day, and then about his love of photography which would take him to Simmer Down on Sunday. His great ambition was to be able to afford a ‘drone’ (so that’s……) which would take his camera above the crowds and get aerial shots. I guess Obama will have to find another way.

One Response to THE SIMMER DOWN VIBE GOES ON