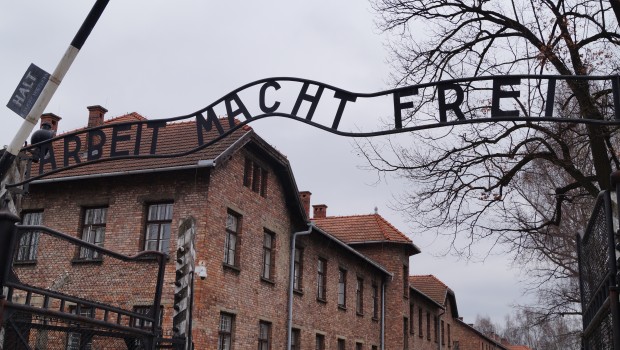 A report from Lydia McMath and Deanna Lyncook, pupils at King Edward VI School Handsworth, and ambassadors for the Lessons from Auschwitz Project (images can be enlarged by clicking  on them).

In preparation for our trip to Auschwitz, the most notorious of Nazi concentration camps, we attended an orientation seminar in the city centre where we discussed our expectations for the trip. We were also fortunate enough to hear a survivor speak and tell us of her experiences at the hands of the Nazis. We reflected on Jewish life in Europe before the war and considered why we were about to visit an authentic Holocaust-related site in Poland.

Both of us were extremely moved by the story we heard from Susan Pollack, a Hungarian Jew who was sent to Auschwitz in 1944 when she was only thirteen years old. She told us how she was forced to witness members of her family being 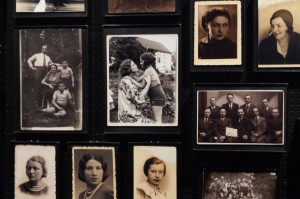 taken away and eventually killed. She recounted her experiences of her time in Auschwitz, as well as at Bergen-Belsen where she was later sent 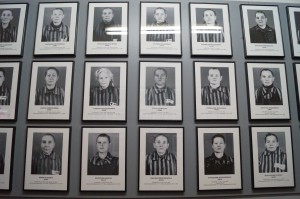 on a death march which she miraculously survived. Susan described herself as “virtually a corpse, unable to walk” when she was found and her testimony helped us break down the statistics and figures associated with the Holocaust. We could therefore appreciate the immense suffering each person was subjected to and the horrific treatment they faced at the mercy of the Nazis.

On Wednesday 5th March we travelled by plane to Poland to visit Auschwitz. Before getting there we stopped off at a Jewish cemetery in Oświęcim which was the original name for the town in Poland that Auschwitz is situated in before the 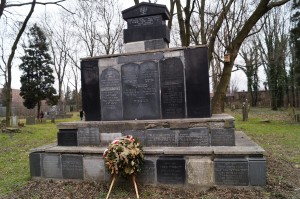 Nazis invaded and renamed it. We learned that, upon arrival, the Nazis had dug up the headstones that previously lay in the cemetery and used them to pave the towns. However, when the camp was liberated a small handful of the 138 out of the 7,000 original Jewish inhabitants that had survived returned and recovered the headstones and tried to replace them in the cemetery. A consequence of this is that the headstones do not coincide with where the bodies lie. At this point in our trip we realised the magnitude of the journey we were on.

We were also saddened to learn that, even though the systematic persecution of the Jews had ended when the war died, anti-Semitism was still very much alive and still is today. The graves we stood next to had been vandalised with anti-Semitic symbols as well as pro-Nazi slogans and symbols. For the both of us, this information made us very aware of the issues the world faces where such a disgusting level of disrespect is shown to those who have clearly already endured such horrific treatment at the hands of authority figures. 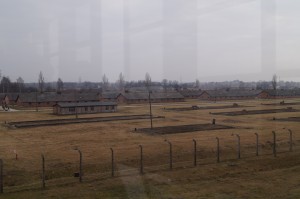 After our time at the cemetery, we travelled to Auschwitz I, the original camp where the infamous ‘Arbeit macht frei’ sign still stands at the entrance. We first saw the brick buildings known as blocks that housed the prisoners, previously used as storage warehouses by the town’s people. It was very difficult at that point to imagine what the place would have been like for the persecuted as we freely walked around on such a sunny day.

Whilst walking around the camp, we had a tour guide and a headset into which our educators from the ‘Holocaust Education Trust’, as well as the tour guide, could speak to us and explain what we were seeing. A number of the barracks had been converted into viewing rooms with exhibits, photographs and information boards 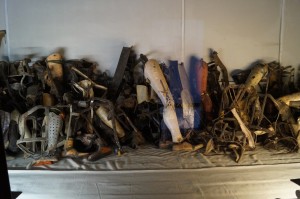 lining the walls. In some of 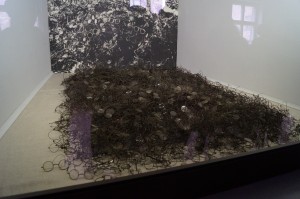 these rooms large glass portioned areas contained the various possessions of the prisoners. An area filled with the hair of 40,000 female victims was, for us, the most shocking and devastating sight as we imagined for a minute 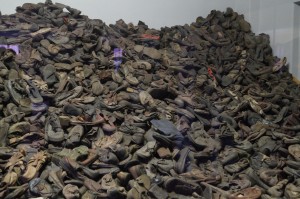 what it must have been like for those women to not only lose their hair but what it represented: their dignity, individuality and their pride. It once 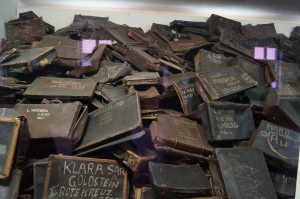 again reminded us that each person had a story and each person was an actual person and not just a number or a name in book. These thoughts were further pushed to the front of our minds upon seeing the rooms filled with suitcases, shoes, clothes, the personal belongings and even the house keys of those who one day thought they would return home.

After our time at Auschwitz I we went on to Auschwitz II, also known as Birkenau. Here we saw the remnants of the gas 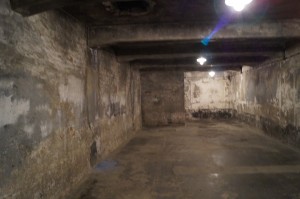 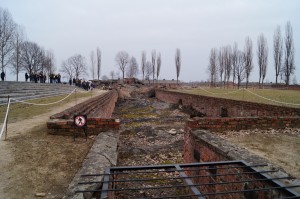 chambers that lay in ruins after they were partially destroyed by the Nazis in a bid to cover up what they had done when they realised Germany was losing the war and the Russians were coming closer. We stopped and took in the sheer vastness of the place as we looked from the observation tower at the place where so many lived out their final days in misery and desolation.

Later that evening we took part in a memorial ceremony led by Rabbi Barry Marcus of ‘The Central Synagogue in London’ who accompanied us to Poland. We were extremely moved by his spiritual passionate words in regard to the importance of Holocaust education and never forgetting what man was capable of. Rabbi Marcus told us he often gets asked “Where was God?” when the persecution of all those innocent people happened, a question we had been faced with ourselves as Christians and in general when studying the Holocaust in a religious capacity. Rabbi Marcus told us that in answer to that question he simply tells them: “You’re asking the wrong question… Where was man?”

These words stuck with us as we were reminded that the people who carried out these hateful, odious, immoral acts were just human beings. It reminded 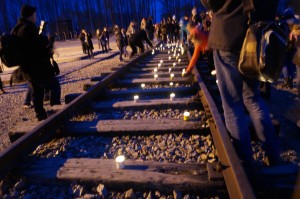 us how responsible we all are for the treatment of the human race. Perhaps the human race has a habit of pointing the finger when things go wrong but if we all took responsibility for our own actions and made the correct moral choices in life events like this may never occur. We held a minute’s silence for those who had perished in the place where we stood. Rabbi Marcus told us that, if we were to hold a minute silence for every single person that perished at Birkenau, we would need to stand for three years… And that’s when it hit us that we were actually standing in a death camp where one of the greatest atrocities carried out by mankind had taken place.

Text and pictures by Lydia McMath and Deanna Lyncook