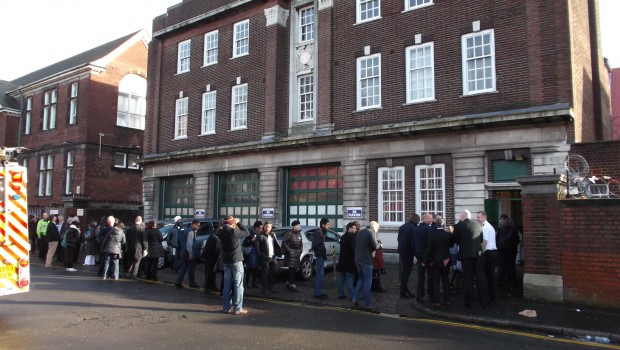 There was a large turnout for the launch of the People’s Heritage Centre at South and City College, Soho Road,  on Saturday 25th January. Many of those present have been active in opposing cuts to Council services, and yet this event in many ways highlighted the way in which the Council is moving away from direct provision of services towards a facilitating role. At the same time, it was an illustration of the kind of locally based drive and creativity which is often used to justify the devolution of  activity to local areas. Councillor John Cotton (surely the busiest and most visible member of the Cabinet) made it clear that the City Council was unable to put any money into the project,  and yet this is the kind of provision which would previously have been developed by the Council – a natural extension of the archive and heritage activity at the New Library.

The meeting helped people think about the potential of the Centre: from the physical possibilities of the old Fire Station building for exhibiting, stimulation and interaction between people and cultures, housing of social enterprises, and 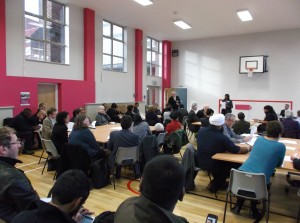 creation of art works; to education and growth for all age groups and communities based on the exploration and creation of separate and shared heritage. The core idea is probably the one expressed by John Cotton: ‘how do you know where you are going if you don’t know where you have come from?’ Handsworth, with its great diversity, is seen as an ideal base for the Centre, but there is further thinking to do about how far it will be a Centre for the whole city.

The proposals are being driven by Legacy WM, a locally based charity that engages in heritage to promote cohesion between and within communities. They worked up the idea with Urban Archive Community Interest Company, The Kingsway Project, and Piers Road Centre. There is now a Steering Group which has added KPMG, RBS, Birmingham University History Department, Birmingham Council and South and City College. The College were very prominent on the day in terms of both personal involvement and donation of facilities. It is estimated that it will take a further 2 years to be ready to put the Centre into action, but in the meantime charitable funding has been secured for developmental work. Anyone wanting to get involved can contact Aftab Rahman at info@legacy-wm.org or phone him 0121 523 0580.

Got views on this issue? Scroll down to the Reply box below and leave a message.