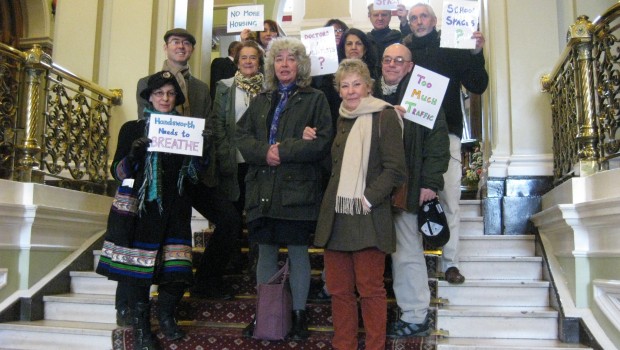 Handsworth residents who were concerned about the apparent lack of consultation regarding two plots of land off Douglas Road and Rookery Road (see previous articles) attended the Planning Committee meeting at Council House on Thursday 6th February.

Senior Planning Officer Simon Hodge started proceedings by stating that 240 people had signed the petition against the planned development off Douglas Road (Planning application 2013/09107/PA), and presented a resumé of the residents’ objections:

Residents’ representative Sue Green was then offered one minute and a half to present the residents’ objections. Due to the lack of time offered, she had to restrict her comments to the inadequacy of the Council’s communication and consultation, the problematic timing of the process (around Christmas), the consultation list being 20 years out of date, finishing with the resident’s concerns about the already very high population density in the area.

Another representative, Tom Hyland, was then given the same amount of time to raise his objection. Mr Hyland had written 16 pages of detailed objections to the planned development off Douglas Road, and sent this report to the Council within the time allocated to respond. His views however were not included in the final Council report. Tom finished off by saying that he would request the Council to explain why his report was not taken into account, possibly leading to a Judicial Review.

Mr Hodge then stated that the Council had followed their own guidelines, and that they had indeed extended the objection deadline in response to the residents’ initial response. He didn’t comment on the other points raised except to say: ‘I don’t believe that if it (Tom Hyland’s report, ed.) had been incorporated to the written report (the Planning Application report, ed.) it would have been dealt any more thoroughly than it was in the way that it already had. The members have had the opportunity to consider all the substantive issues that Mr Hyland raised prior to making a decision on the application’.

The Council’s Senior Solicitor Tarndip Sandhu confirmed that each objection had been addressed by the Council.

The Council then voted on the motion, with these results: 7 in favour of the Application, 0 against, 6 abstentions. The motion was therefore approved.

Regarding the second planned development, on Rookery Road (Application 2013/08660/PA), Mr Hodge confirmed that 12 additional letters had been received and expressed similar concerns to the ones cited above, as well as the following:

The decision regarding this plot of land (where the old Excelsior Works  jewellery-making factory has already been demolished) was quickly ratified as Approved.

One resident said she was shocked that there was no-one in favour of their objections and raised doubts that the Councillors cared about Handsworth at all. ‘Obviously they don’t live in Handsworth, so they don’t care’.

Sue Green commented: ‘We are deeply disappointed that none of our local Councillors turned up to support us at this meeting. We will continue to fight this decision. We are not just fighting this decision but all future developments in Handsworth’.

If you are interested in viewing this meeting, go to http://www.birmingham.public-i.tv/core/portal/webcast_interactive/126836 – (Items 7 & 8 of the Agenda).

One Response to PLANNING APPLICATIONS APPROVED