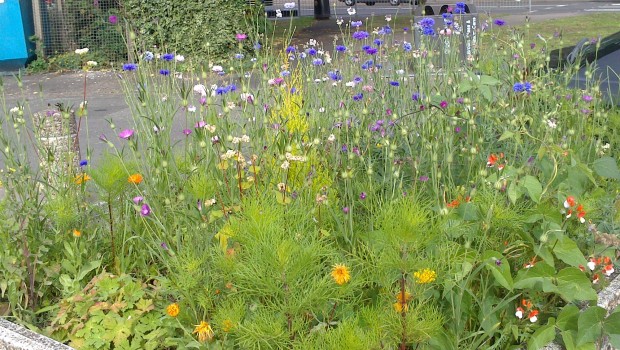 All over the country, guerrilla gardeners have decided to reclaim derelict urban plots of land in order to improve their community’s appearance. Whether it is legal is a moot point but, the authorities having done nothing about it and having decided that action spoke louder than words, they took their gardening tools, surplus plants and seeds and got to work, transforming these plots into gardens. Flowers, vegetables, fruit bushes, trees, anything is fair game in their view that it is better to have well tended. attractive gardens rather than sorry-looking eyesores.

On a sunny afternoon in June 2012, some women were busy weeding four large concrete planters situated by the Grove Lane roundabout. They were part of a local women’s group who decided they were fed up seeing those prominent sites used as a rubbish bin by people too unconcerned to use the nearby bins. 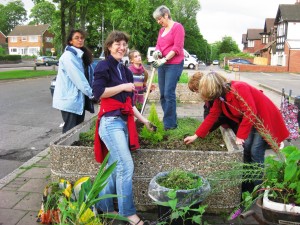 Tonia Clark explains : ‘A few of us got talking about the sorry state of the planters outside the Co-operative and decided it could be fun to do a spot of creative midnight gardening. The planters are about 1.5 m sq and have one tiny conifer in the middle of each. They have good soil which is quite deep but were weedy and unkempt. We called a meeting at the local pub and about six of us turned up with a variety of ideas: we could plant herbs, annuals, perennials and soft fruit – anything which would be pleasing to the eye and to the palate. And hopefully, seeing those planters being tended would stop people from using them as dumps’. 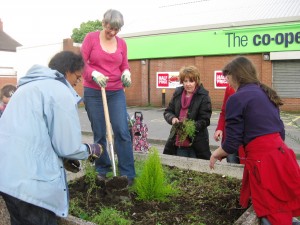 Having cleared the planters of weeds and rubbish, the women met again to plant a selection of what they had surplus to requirement – from cornflower to rhubarb, from mint to raspberry bushes, it all went in.

The transformation was instant. From grey, drab looking concrete blocks, those planters became tidy plots of well tended mini gardens. Within weeks they were unrecognisable, covered with jewel like flowers of all shapes, sizes and colours – and although the women had to keep on top of the weeds, hardly a sweet wrapper or beer can in sight.

‘It seemed obvious to us that people respect their environment a lot more if it is well looked after, and our little experiment is the proof of this.’

The locals were bemused by the activity, though once they knew what the women were trying to achieve, they were unanimous in their support. ‘People were curious and asked us if we were employed by the Council to do this. When we explained that we were just a bunch of friends trying to make our surroundings look better, they were very supportive. The taxi drivers, the shoppers, everyone that stopped by told us what a good idea this was. Even the councilmen who were there one day to replace the flowers in the roundabout, they gave me a few plants to put in the planters. And the Co-op has been supportive too. I love coming every now and then just to do a bit of weeding, it’s amazing the number of people who stop by for a chat and a pat on the back’, said one of the women. 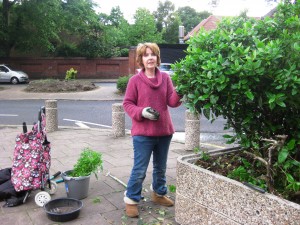 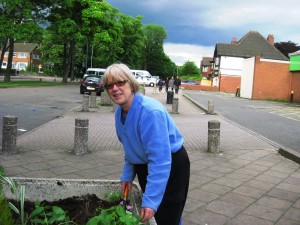 ‘Just a small action by a small number of people can have an immediate and dramatic impact on our neighbourhood. Imagine if neighbours adopted all the other bits of derelict land around Handsworth. The whole area would be blooming!’

Blanche Singh comments : ‘People are very surprised that we do this without being paid, but they are really rooting for us. A man who was a bit worse the wear for drink came over from the pub nearby, and asked us what the hell we thought we were doing. We all thought he was joking but he was completely serious and had come over to stop us from digging up ‘the lovely plants’ that had been planted. Once we had explained what we were doing he congratulated us and we asked him to keep an eye out. Our own guardian!’